- November 27, 2016
I had saved this weekend to binge watch Gilmore girls on netflix just like every other fan of the show.   I do not usually binge watch anything and I try to stay away from shows that may be addictive enough for me to have to spend a whole weekend watching this. How could I not watch Gilmore Girls with all the effort they went through to get a real ending. It was 4 episodes that were 1.5 hours each so a lot to get in during one weekend. I finished today and wish I had someone to discuss my thoughts with. I liked episode 1 and 2 episode 3 I fast forwarded through a portion of it. Episode 4 was the ending and it was good but it wasn't like the original. The acting and writing for the most part was as good as it always but some pieces didn't feel right. I enjoyed watching it but I didn't like the ending I know this was always going to be the last few words but it left so many questions. Maybe there will be a second season or a sequel to find out what really happened.

On Monday night we had a dinner meeting at work and then meetings all day on Tuesday. I have a long commute so decided to stay downtown for the night. I had a $100 gift card for the fairmont I received a couple of years ago and haven't been able to use yet and Bevancouver was offering $125 amex gift card promotion. I have used it before you get $125 amex gift cards when you check in to the room and you can use that towards your room. The room was $250 so I ended up paying $25 for a luxury hotel.

I checked in during my late lunch break which was around 3pm and had no problems. Front desk was very friendly explained everything I wanted to know to me and made sure my room was ready. I had two queen beds even though I was alone. I took pictures of the room, read the note that said window washing would be between 9-5 close the curtains for privacy, and went back to work. 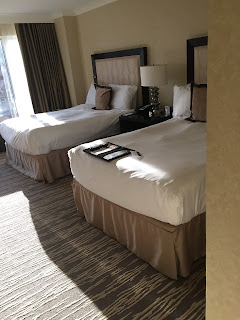 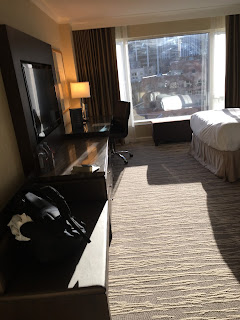 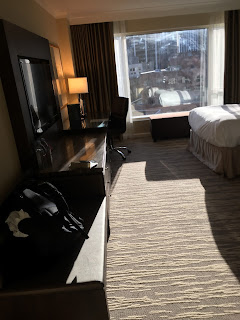 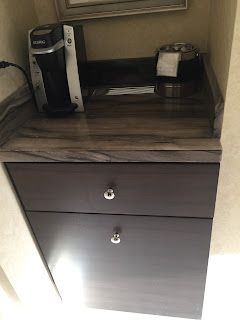 I got back to the room around 930 and had to be back at work at 9 am. I had forgotten to get water there was Evian in my room for $7.50 a bottle. I didn't want to pay for it I had enough water for the night. There was a charging station under a cover in the desk it had every outlet I could possibly need I plugged my phone in and stayed up a while watching tv while it charged. There was only an alarm clock in the room I wasn't sure if I was setting it right and I need a bunch of alarms to wake me up I will sleep through just my phone alarm. It took me a while to figure out royal service on the phone was front desk the service was great they addressed me by name when I called. I asked for a 6 wake up call and they asked if I wanted a second one 15 minutes later I agreed. The wind up alarm clock went of at 2am but the beds were so comfortable I thought it was 6 am. I didn't like that there was no clock with digital time in the room. My wake up call came on time but I was already awake.

Since I had woken up early I didn't have enough water to take my medication and I didn't want to get dressed and go out that early. I followed the signs to the ice/vending machine but it was only a room with an ice machine. I walked around to see if there was another place for a vending machine but there wasn't wish those signs weren't misleading.  There was organic soda's and other drinks in the mini bar so there was no need for a vending machine. I went back to my room and bought the big bottle of water and made sure I drank all that expensive water. After I got dressed it was pouring rain so I decided to go to the hotel restaurant it was great they addressed me by name and offered me a choice of papers to read. There would have been a great view if it wasn't pouring rain. They offer a buffet I didn't look at it i had the menu. I knew that they have their own bees and make their own honey which is something I wanted to try they had it in little bottles on the table with the jam. I ordered granola which had apples and nuts. They brought me milk on the side but the granola already had some in it. The granola was good so was the honey.

I really enjoyed my stay I wished I had time to stay there longer. If I get another great deal I will stay again.