Week of November 20 -steamer, lunch at Pasta Polo, and Moview at VIP theater 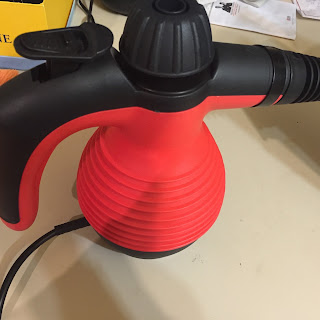 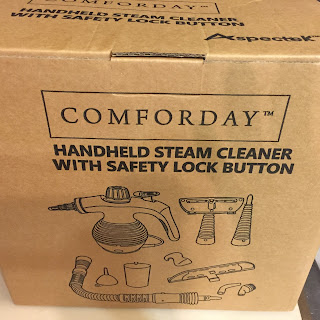 My steamer arrived from amazon. The tip had broken of my old one a long time ago so I had been using it without the attachments for so long. I forgot how much better being able to attach a brush or a cloth to the steamer is. I didn't know they were so cheap or I would have bought a new one a long time ago. This steamer is a little bit smaller than my old one which means I have to refill it more often but that is okay just do sections at a time. I hate cleaning but I love steaming its so easy and fun to spray the steam and wipe it after the steam is so hot it disinfects. The brush attachment is great for giving thing a little srcub. I also love how shiny things are after they are sprayed with steam. 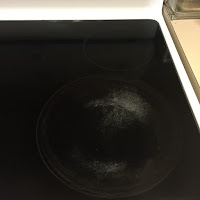 Sunday fun day after going for the blood test I arranged weeks ago I went to lunch and a movie with my best friend, her sister, and her step mom. We have been friends for 17 years so they are family now. We started out having lunch at pasta polo which is known for their quality pasta and growing their own herbs. They have a three course menu for $20. I started with a salad and the others with minestrone soup all very good. They also offered freshly grated parmesan cheese and black pepper. which we happily accepted. I ordered spinach and cheese manicotti it was the only vegetarian dish on the three course menu when it arrived it was actually two separate pastas. The spinach and cheese manicotti was filled with lots of spinach and cheese and the other pasta was penne. I think it was a rose sauce but I am not sure it was good. Two others had seafood manicotti, and one fettucine alfredo that wasn't part of the three course menu. For dessert there was ice cream with espresso sauce or tiramisu three of us had the ice cream and one that was seperate had tiramisu it was very good. I couldn't taste much of the espresso in the ice cream the sauce was good and I could see the ground coffee. 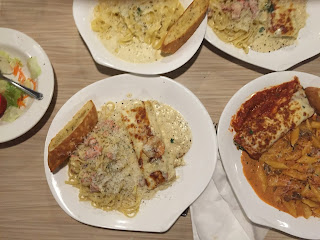 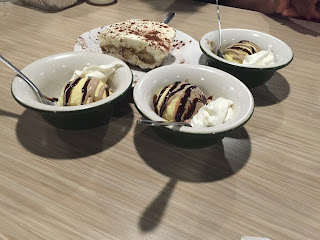 After we were stuffed we went to the vip theater at silver city. The vip theater has assigned seats a private bar area and servers that bring food to your table. One person ordered wine at the bar and the rest of us got water to take to our seats the one large glass of wine cost $14. The food prices are much more reasonable.  We were full so need to order food to our chairs but I did notice there isn't enough servers to get orders out before the movie starts they really need to automate the ordering process. I have been to this theater a few times and noq I can't go to regular theaters as they aren't the same. I do not see movies much so for me they are a treat. My friend used her scene points to get our movie tickets. We saw the arrival and all 4 of us agreed that the movie was terrible. It had a good story but really poor execution it was very boring and not exciting to watch. The four of us never agree on anything so it had to be pretty bad. I was having a hard time not falling asleep in the comfy chair I think I did fall asleep a couple of times. The experience of the theater is good even if the movie isn't.