- May 04, 2020
I have used my instant vortex plus airfryer oven almost daily since I bought it in October. I am in airfryer oven Facebook group and people keep posting the 2 ingredient bagel recipe. The original recipe is self rising flour and Greek yogurt. The time I decided I wanted to try this was a couple months ago when the pandemic was starting and I couldn’t find any flour. I finally found organic all purpose wheat and pastry flour. I couldn’t find baking powder or self-rising flour and I had Dahi which is an Indian style yogurt not Greek. I also have organic baking soda and I like to experiment. 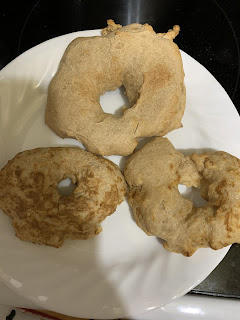 I set the oven to airfry which is 400 degrees and the timer for 10 minutes. While it was preheating I poured some flour into a bowl and added the yogurt mixed together and shaped some of the dough into a bagel. The big bagel in the picture is just the two ingredients. That one will be a future doughnut recipe.

Then I added some baking soda to the mixture and shaped into a bagel. The small one on the left is the three ingredients. This tasted most like a bagel.

Them I added some olive oil to the remaining mixture. The bagel on the right is all 4 ingredients that will be a future pizza bun recipe.

I really liked the recipe with yogurt, baking soda, and flour. Then I made different variations of this for breakfast 5 days in a row. I can have fresh, tasty bread in 10 minutes everyday it is amazing. 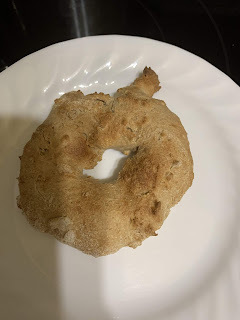 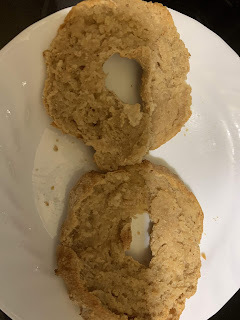 Hmm I wonder what will happen if I add an egg. It wasn’t good. 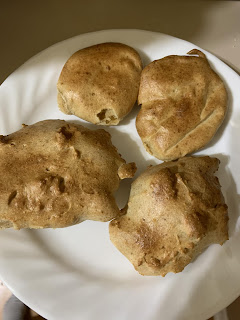 What if I add an egg and forget the baking soda for the first one. No still not good. 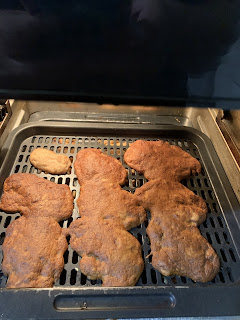 Back to the original recipe what if I add cheese. It was delicious deli quality. 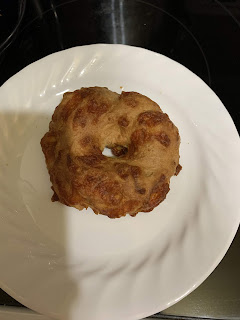 Now I have a deli quality bagel recipe maybe I should try making a bun for my breakfast sandwich with a Gardein veggie patty. Same recipe but added some flavoured olive oil. 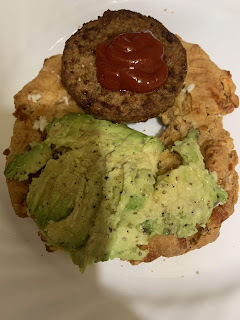 Hmmm that tasted much better than the first time.

I found the last bag of organic baking powder in a store yesterday. Now I can finally try the original recipe but oh no I don’t have much yogurt left. Let me try adding some olive oil and maple syrup will I get donuts? 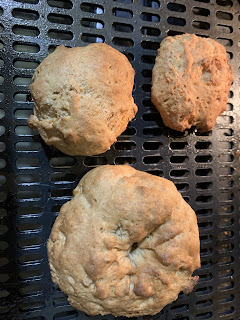 This wasn't a doughnut recipe but that was one of the best textured scones I have had. Crunchy on the outside and not dry on the inside.

This blog is to be continued as I continue to get ingredients I will keep experimenting the results are delicious.
Air fryer bagel