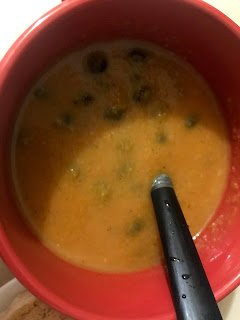 This soup is so good I am returning to blogging just so I don't forget the recipe. I watch a You tuber named Wicked Penny and she is making soup every Saturday on her channel. She made a cheeseburger soup so if you would like to see the inspiration for this soup go watch wicked penny on YouTube here is the link https://www.youtube.com/watch?v=kD5euE9Pgas.

I used most of the vegetables pictured below because they were on sale. I recommend using an onion and green pepper for flavour. As the soup is vegan I like to use a potato and sweet potato to give it a creamy texture. The carrots were on sale so I added them use any veggies you like.

I didn't have any soup stock but spicy ketchup, seasoned diced tomato and whatever spices you have will give the soup a nice flavour. If you don't have spicy ketchup add hot sauce and ketchup. I used seasoning salt, smoked paprika, pepper, and curry spice just what is in my spice cabinet. You can really change the flavour of the soup by changing the spices to what you like.


If you have not seen my previous posts I have a soup maker that I bought at a festival years ago. It is the best thing ever and you can find it on amazon.

Add a little bit of olive oil to the bottom of the soup maker.  Roughly chop all the vegetables add to the soup maker. Add spices and a little more olive oil. Add canned tomatoes and ketchup.  I had to drain a little of the water from the tomatoes because the soup maker was too full. There is no need to add additional water. I do not use actual measurements for the spices but I would recommend using a teaspoon of each spice, ketchup, and olive oil. Close the lid and set it to smooth. You have 26 minutes to go do something else perfect for a 25 minute workout.

26 minutes is up. Open the lid add a can of drained black beans and close the lid for a few minutes. You could use a plant based meat instead of the beans but I wanted beans.


Prepare your garnishes. Why am I showing you cream cheese for a Vegan Soup? Wicked Penny's recipe had cream cheese in it I wasn't sure about that so I added it later to a bowl. Maybe it was the sun-dried tomato flavour but I preferred the soup without the cream cheese so left it vegan. I tried another bowl with nutritional yeast and it did not change the flavour much so a good alternative. I also had a bowl with some cheese crackers and that was the best way to get the cheesy flavor if you want it. It is not necessary this soup is good on it's own.