- September 07, 2020
I have rarely left the city where I lived for the last 7 months as we are in a pandemic. This is a day trip to Harrison Hot Springs which is a little less than a 2 hour drive from where I live.
Video on YouTube

Thankfully I live in an area that has low virus cases and local travel is allowed. My mom and I both have not left our houses for more than a few hours a day and were concerned that we would run into issues of needing a bathroom. When I was younger we would often spend a few days in Harrison so we know the area. The resort is very nice but we currently wanted a place to go for a few hours. It’s almost the end of summer and although I live in a beautiful city it’s nice to go to somewhere less city like.

We decided to leave at 1100 so that we would have a few hours of daylight. Our intention was to go for the drive, have lunch, walk near the lake and come home. We were not sure if the hotel and restaurants would be open due to Covid restrictions and knew the public pool was closed.

We arrived around lunch time and it took us sometime to find parking. My mom wanted to be near the hotel we did find parking there was a line up to pay. It was $12 for 2 hours. This is expensive but it was a holiday weekend in summer in a tourist location so it’s acceptable. We needed to find a bathroom so went to the hotel first. There was a private event at the restaurant maybe a wedding. The hotel was open but the bathroom was closed for cleaning. There was a line to go in and everyone was staying distanced in line everyone rushed in when it was open but the bathroom was large enough to manage a small crowd.

We walked at the lake there was a good amount of people but not super crowded. Everyone was in their groups apart from other groups but that is normal here. There were some groups playing loud music and it gave a nice atmosphere.

Then it was time for lunch. Most restaurants had closed their indoor seating and offering patio seating or takeout. We prefer to get takeout and go eat at the lake. There are lots of benches and places to sit away from others. I had to go into the restaurant to order and everything was normal there. We do not have mandatory mask rules here but where I live most people wear them indoors. I was the only one wearing a mask to get my order and other than restrictions on how many people were in the restaurant and how few people were around nothing was different than what I remember from past trips.

I had a veggie burger for lunch 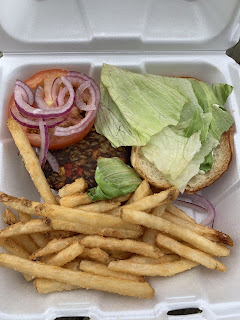 Previously I had seen a coffee shop/bakery I went to go see if there was something for dessert. It had suddenly become crowded at the ice cream shop next door and I couldn’t see past the crowd. They did come out and ask the crowd to disperse and there was a 3 person limit inside. I decided to avoid the crowd and go to Rocky Mountain Chocolate next door. There was no crowd the employees were cleaning in there. I like the Apples but the store in my local area has closed I knew this was my chance. I chose the apple pie flavour 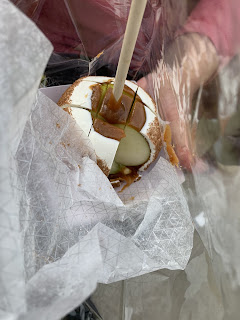 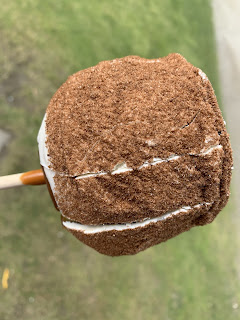 Then it was time to head back home. Went back to the hotel but the bathroom were being cleaned again.

It was a really nice trip other than the extra cleaning, ventilation, distancing sign it felt like pre virus times. Less crowds and more fresh air was a great trip. May return after summer for a stay in the hotel would be nice to be able to use the pool again.